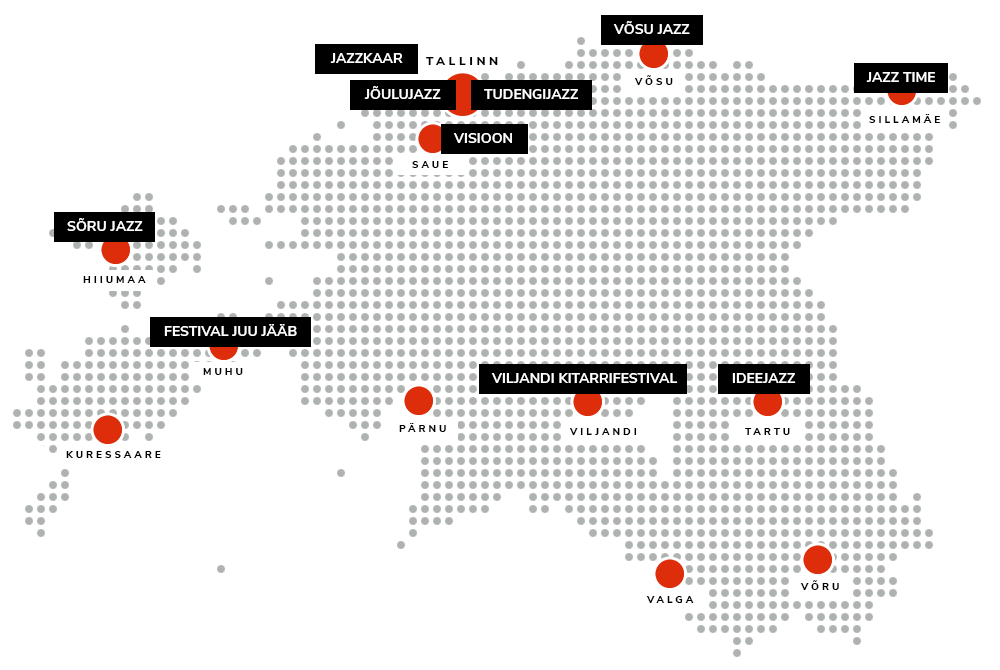 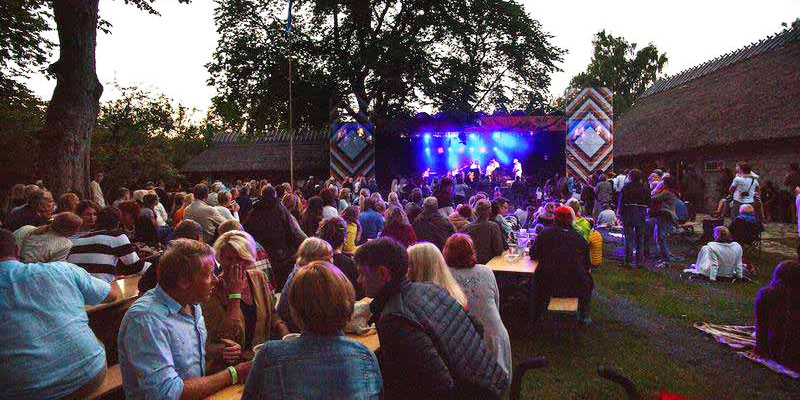 Festival Juu Jääb is a cultural event held on the tiny island called Muhu (neighbouring island of Saaremaa) in Western Estonia. International Muhu Future Music Festival JUU JÄÄB (since 1997) is an annual summer festival in Estonia, which brings together musicians and artists from all over the world. Artists from the USA, the UK, Brazil, Argentina, Japan, Mongolia, France, Finland, Russia, Latvia, Lithuania, Poland, Bulgaria, Faroe Islands, Italy, Nigeria, Denmark, Canada, Columbia, Sweden, and of course Estonia have been taken part of the Juu Jääb Festival throughout the last 20 years.

Juu Jääb is traditionally held in the end of June in Muhumaa. 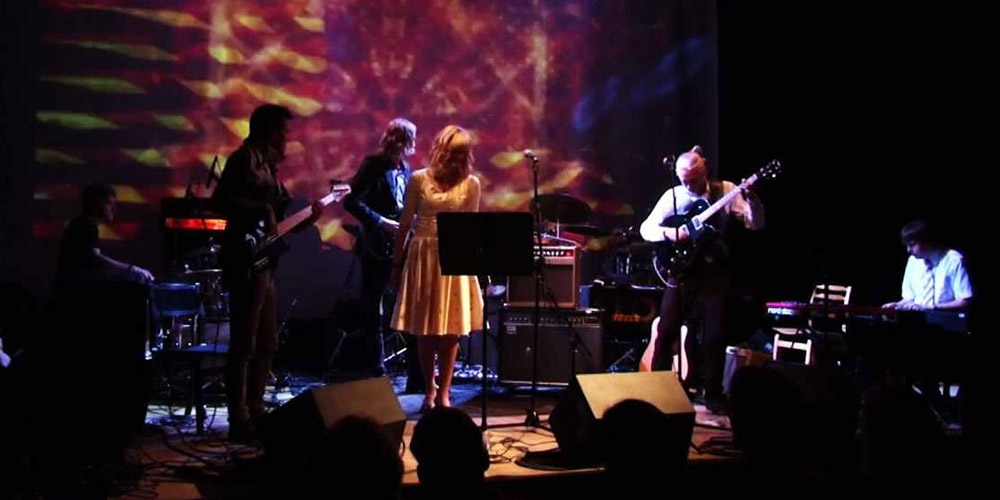 The Tartu International Jazz and Rhythm Music Festival IDeeJazz, the festival of good vibes, takes place in November and brings energy, joy, and inspiration to the Estonian autumn. IDeeJazz has been taken place in Tartu since 2011 and in Narva starting from 2017 and it aims to place both cities on the world’s jazz culture map by bringing the best representatives of Estonian, European, and different continets’ jazz music on stages. IDeeJazz is like Estonia – not that big, but, on the other hand, rich in content – every concert is different and unique. The festival fills the dark time of autumn with creative energies of top musicians of the world – a good vibe in any weather.

IDeeJazz is traditionally held in November. 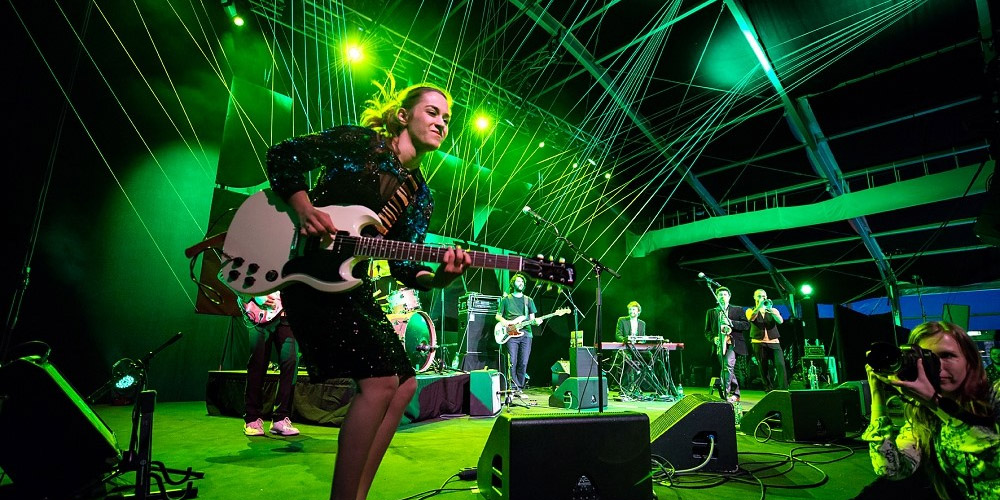 Jazzkaar is the biggest jazz festival in the Baltics, held in Tallinn, the capital of Estonia since 1990. With an interesting and unique program as well as daring solutions, Jazzkaar is the best jazz festival in the Nordic countries with the lowest budget, bringing the greatest and most interesting finds in jazz music to Estonia filling Tallinn and the whole Estonia with beautiful jazz. The 10-day festival called Jazzkaar is the festival with the highest number of concerts in Estonia and in which over 3000 foreign artists from 60 countries have performed. In addition to the annual spring festival, Jazzkaar also organizes a Christmas Jazz festival, Winter Jazz, and Autumn Jazz.

Jazzkaar is traditionally held in April. 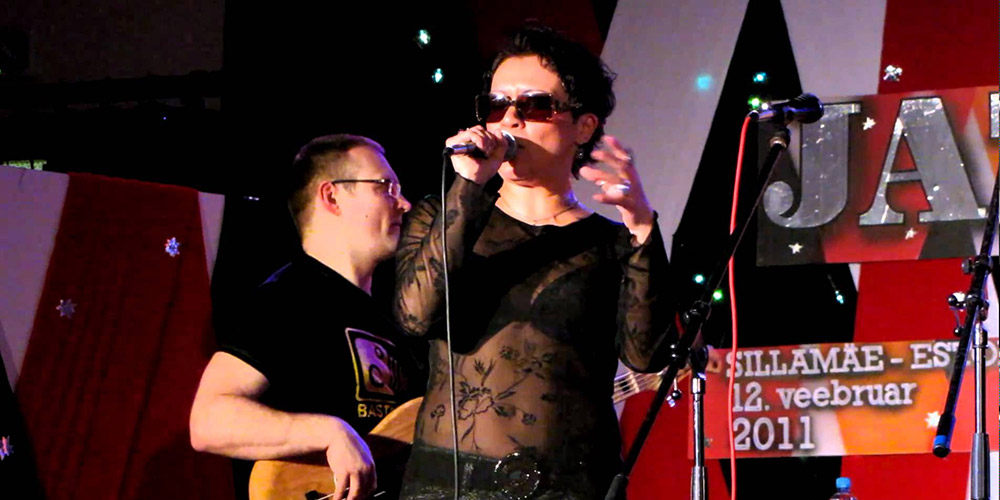 International festival JazzTime was founded in 2004 by Sillamäe Music School. Throughout its history, JazzTime has hosted different participants – from the very young musicians who are just starting their careers to such masters as the famous pianist and composer Raimonds Pauls. Bands from Estonia, Scandinavia, the USA, Japan, France, and Russia come to share their love for music, as well as their contribution to it, with the audience. The patron of the festival is maestro Raimonds Pauls, the artistic director is Toivo Unt, and the festival director is Vladimir Vysotsky.

JazzTime is traditionally held in May in Sillamäe. 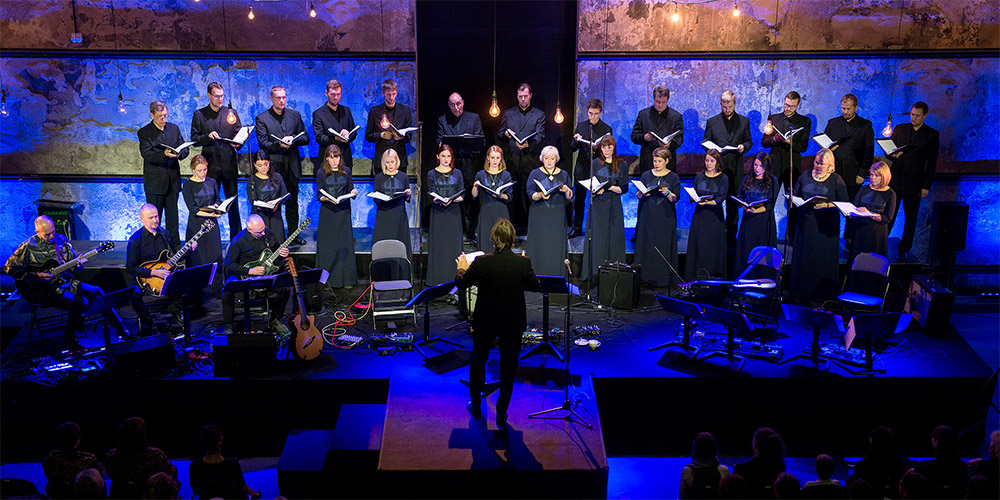 Christmas Jazz (Jõulujazz) is an intimate and serene-sounding festival with varied concerts at churches, clubs, and concert halls. The festival features the best jazz performers from the US, Europe, and Estonia. Christmas Jazz is organised by Jazzkaar, the biggest jazz festival in the Baltics, and has been held in Tallinn since 1990.In addition to the annual spring festival, Jazzkaar also organizes Winter Jazz, and Autumn Jazz.

Christmas Jazz traditionally takes places in end of November and beginning of December. 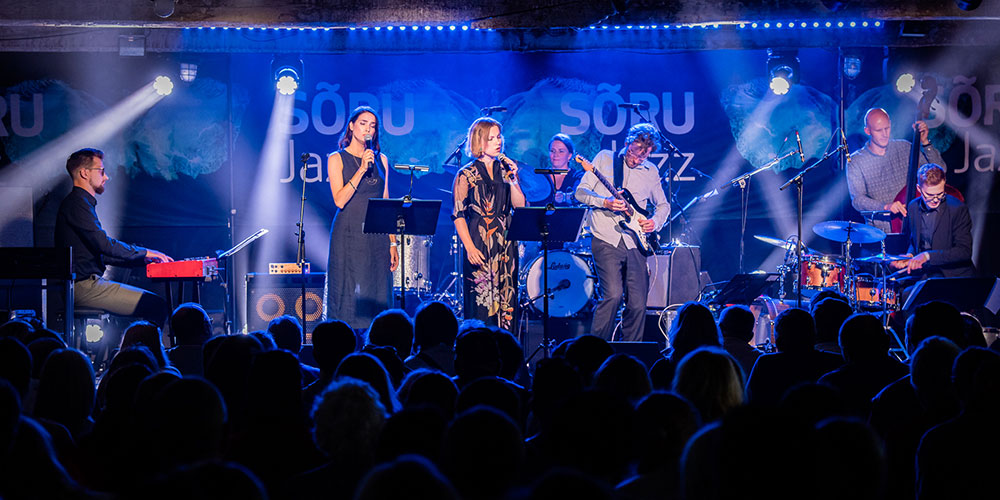 Sõru Jazz is an Estonian jazz festival that celebrates the arrival of summer after a long bleak winter with quality music and wonderful people in the picturesque island of Hiiumaa. The concerts take place in the boat huts of Orjaku, Kalana, and Sõru, where the melodies of music intertwine with the sound of waves crashing against the shore.

Sõru Jazz is traditionally held in June on the weekend before Midsummer’s Eve in Hiiumaa. 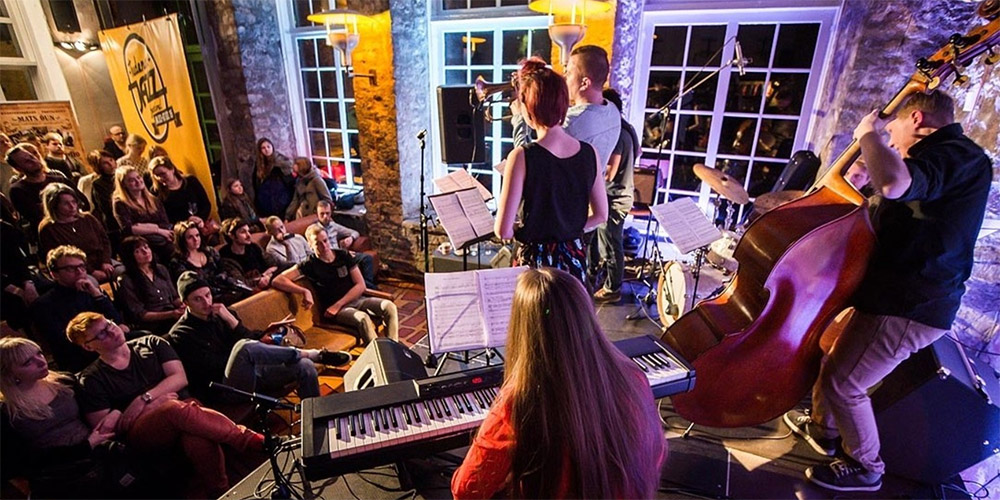 Student jazz (Tudengijazz), established in 1982, is one of the oldest and the most unique international festivals in Estonia. It is dedicated to students of jazz music and their fresh ideas. The festival brings together young musicians from all over Estonia as well as from different European countries to play and share their music. Musicians have a great opportunity to make international connections and get the feel of a real festival. The festival takes place during spring time, when students are about to finish their studies and are ready to come out with fresh and exciting music. The festival has a very intriguing history, it first took place during the time when jazz music was not allowed in Estonia. Since 2011, the festival is organised by the Jazz Estonia. With its help, it became a high-quality festival that gives the artist and listeners always a full festival experience.

Tudengijazz is traditionally held in March. 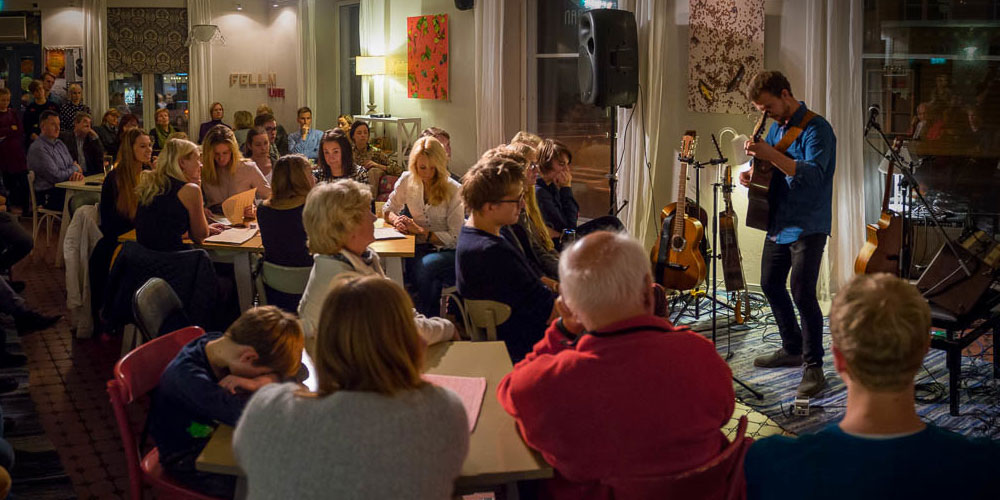 The focus of the Viljandi Guitar Festival (Viljandi Kitarrifestival) is on promoting improvisational and cross-stylistic guitar playing skills are introducing guitarists from Estonia and abroad to develop international cooperation in the field of guitar studies. A very important part of the festival is workshops and master classes given by the performers of the festival – this culminates with the concert of the Festival Guitar Orchestra. The festival also gives out the Tiit Paulus Young Guitar Player’s Award.

Viljandi Guitar Festival is traditionally held in October in Viljandi. 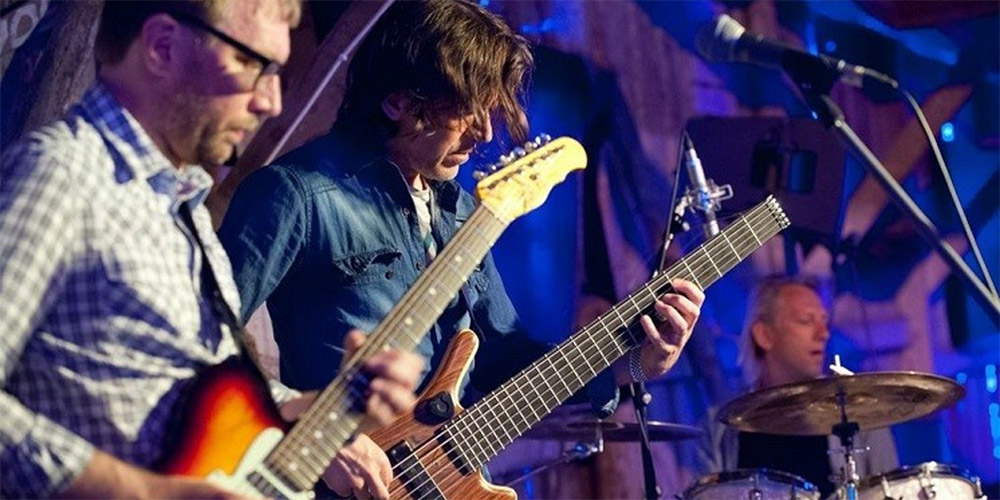 Every summer, on the second weekend of July, a jazz festival called Võsu Jazz takes place in one of the most beautiful beach resorts in Estonia – Võsu! The keywords of Võsu Jazz are summer, high-end musicians, beautiful gardens, good food, and magical atmosphere. Being one of the largest holiday hubs in Northern Estonia, Võsu is the perfect place to host a musical gourmet festival. 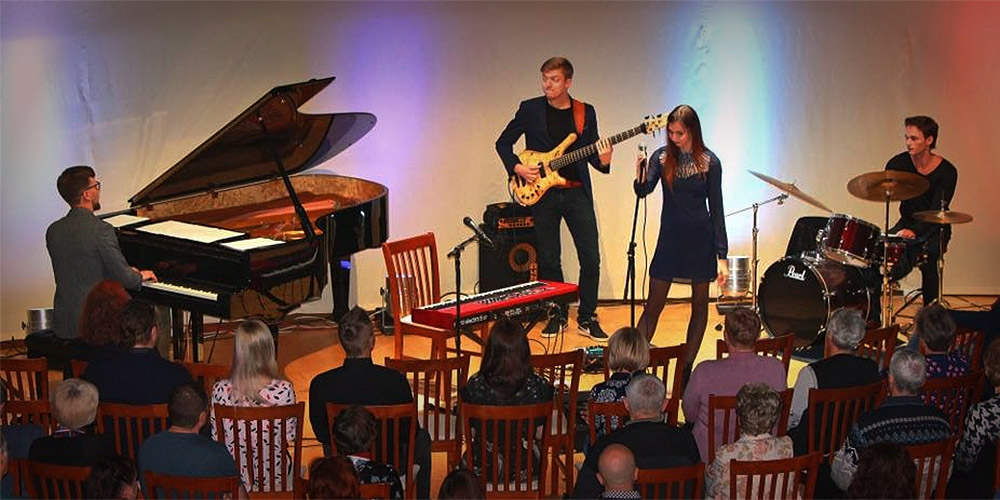 The International Youth Rhythm Music Festival Visioon is a unique rhythm music festival in Estonia. It takes place annually in June in Saue and Tallinn.

The festival is directed at adolescents and young adults to familiarize them with jazz and rhythm music and to develop the music itself.
The festival includes two parts supporting each other: the festival Visioon and the Days of Creation and Improvisation.